Maxillary impacted canines are commonly encountered in orthodontics; their frequency is well reported in the general population. Approximately 2.5% of maxillary canines become impacted. Various traction modalities have been employed in orthodontic literature with both vestibular and lingual appliance systems for both labially and palatally impacted canines. This case report is amongst the first to describe hybrid mechanics, staging, and clinical protocols with aligner therapy for successful management of a palatally impacted canine.

Palatally displaced canines or PDCs, commonly known as 'eye' teeth, are often displaced in the roof of the mouth. This can leave unsightly gaps, cause damage to the surrounding roots (which can be so severe that neighboring teeth are lost or have to be removed) and, occasionally, result in the development of cysts. PDCs are a frequent dental anomaly, present in 2% to 3% of young people. Female patients are more prone to palatally impacted cuspids, compared to a male cohort.

Management of this problem is both time consuming and expensive. It involves surgical exposure (uncovering) followed by fixed braces (either vestibular or lingual) for two to three years to bring the canine into alignment within the dental arch. The challenge is further compounded when patients refuse fixed appliances and indicate a preference for aligner therapeutics. The reason for this challenge is because forced eruption of impacted teeth warrants “pull mechanics”, while as aligner therapy primarily employs “push” mechanics for orthodontic tooth movement.

Scholarly literature has indicated that aligners have become more predictable in treating malocclusions. This can be attributed to a variety of factors including material and technological developments, and the orthodontists’ better understanding of mechanics and therapeutic limitations with the system. Currently none of the studies have reported a sizeable cohort of impacted teeth treated with aligners, and case reports are scarce too.

This case report showcases a 16-year-old with a palatal impacted canine, that was successfully treated using aligner therapy integrated with hybrid mechanics in a phased manner. The three-phase protocol with rationale employed is described and can serve to be a learning resource for clinicians.

A 16-year-old female patient presented with an asymmetric Class II malocclusion, mild overbite, and missing upper left cuspid with the presence of the preceding deciduous tooth was observed.

The upper and lower incisors were slightly protrusive. The patient's smile was not esthetic due to a midline diastema, Narrowness of the upper jaw and negative buccal corridors were observed. The maxillary midline was shifted to the right. 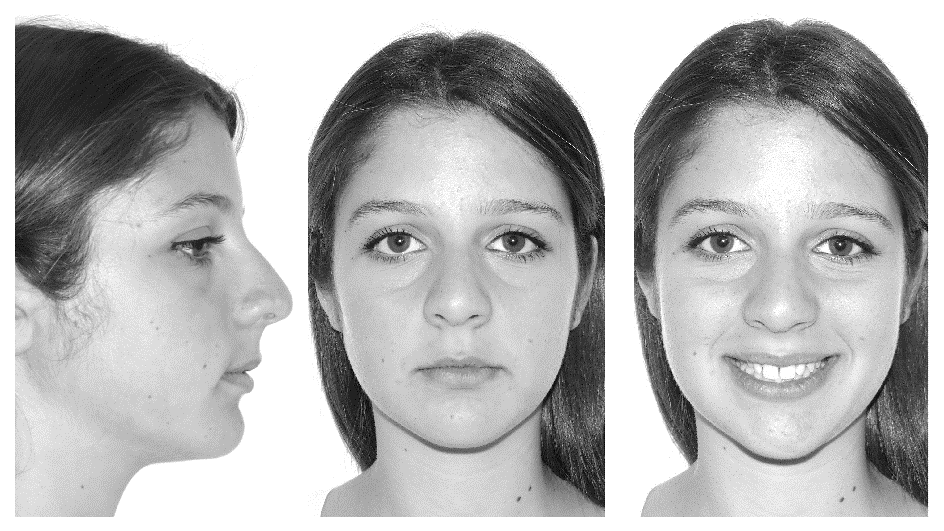 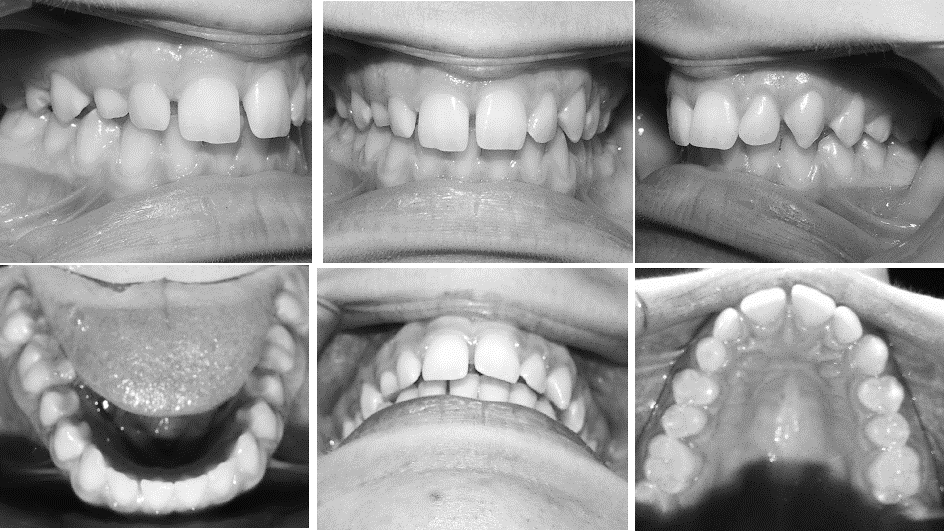 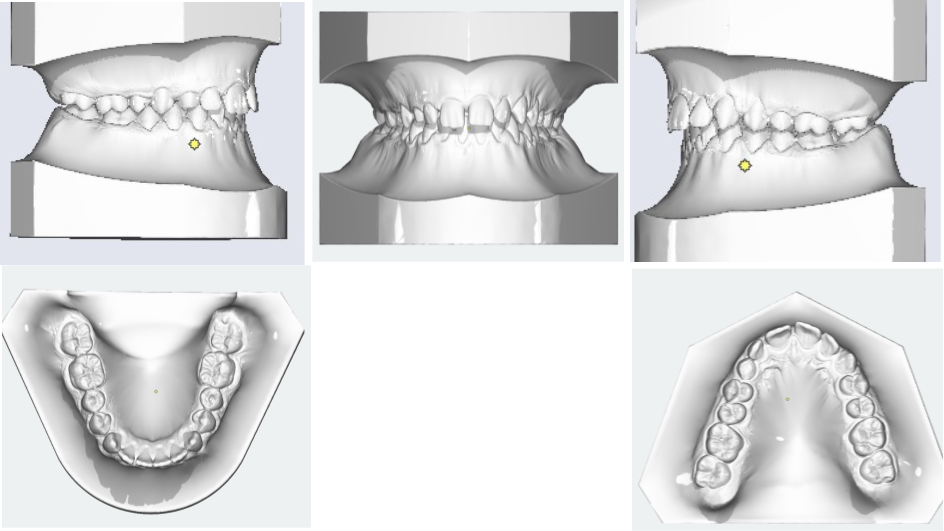 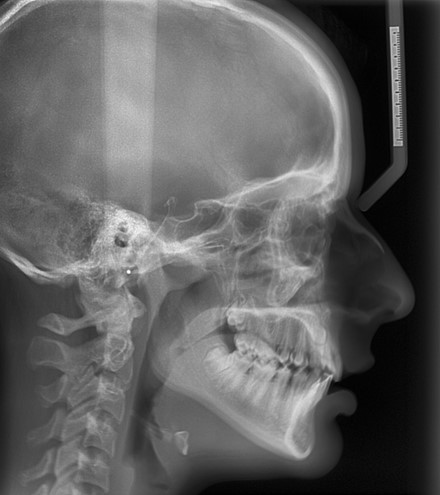 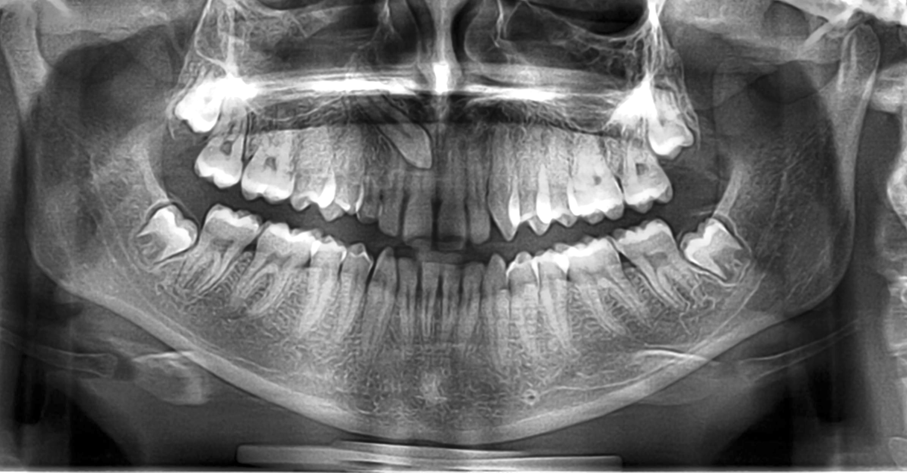 Treatment objectives in the case were to:

Scholarly literature has demonstrated various adjuncts including temporary anchorage devices along with fixed appliances and hybrid mechanics for uncovering and traction of palatally impacted cuspids. The patient was not willing to undertake therapy with either a fixed appliance, or a palatal TAD supported adjunct. Hence, traction with hybrid mechanics and aligners was the only viable alternative. The possible limitations and risks were explained to the patient and guardians.

The orthodontic treatment with aligners would include III (three) phases, each with well-defined objectives: 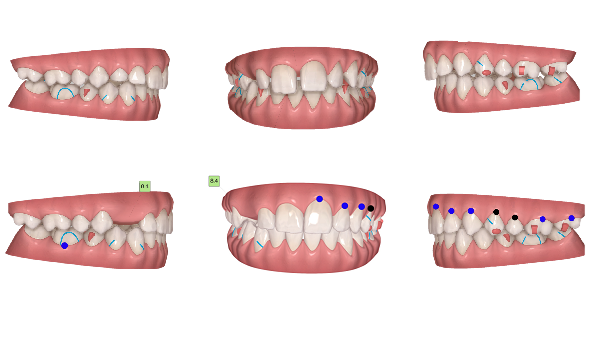 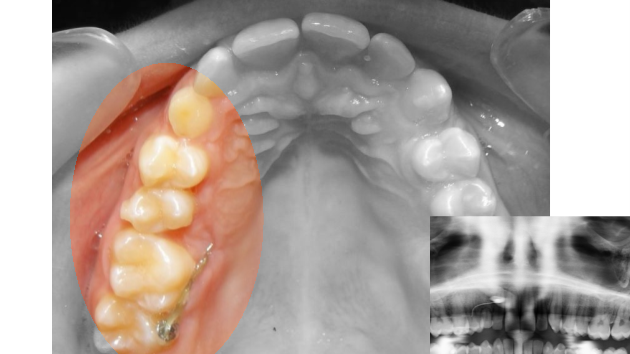 Fig. 4a: Closed technique for occlusal and distal guidance of the impacted canine 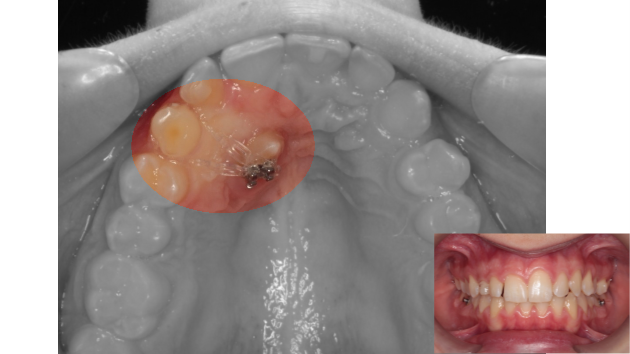 Fig. 4b: The deciduous canine strategically employed for anchorage of the impacted tooth 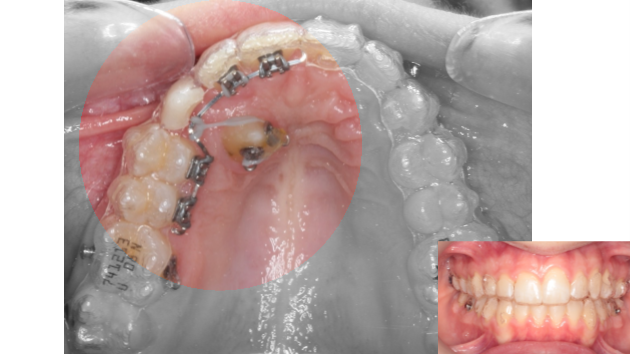 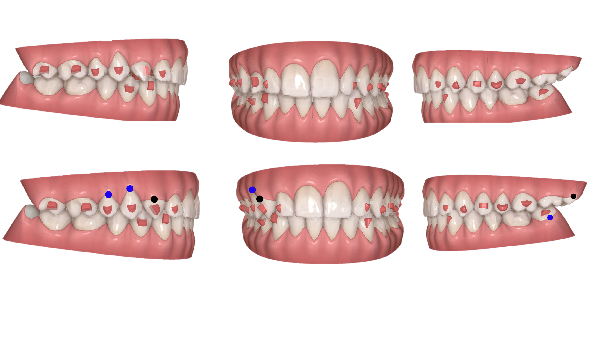 Final clinical records show good esthetics and functional positioning of upper right impacted canine in the arch. The patient's smile considerably improved, and the treatment was completed within 30 months. Periodontal evaluation at the end of treatment showed healthy marginal tissues with pale pink and firm gingivae. (Figure 6 and 7) The gingival smile line was improved, with the gingival parabolas of the canines at the same height of the central incisors, contributing to the pleasant smile esthetics. The patient does desire some micro esthetic gingivoplasty, which will be carried out six months later.

Occlusal results evidenced a proper bilateral Class I relationship and a correct overbite. A mutually protected occlusion with canine guidance during excursive movements was achieved. Proper interdigitation of the upper functional lingual cusps into the fossae of the lower teeth was achieved. Moreover, upper and lower midlines were facially centered. A critical appraisal of our results would probably indicate the need for more precise root alignment in the upper right quadrant. 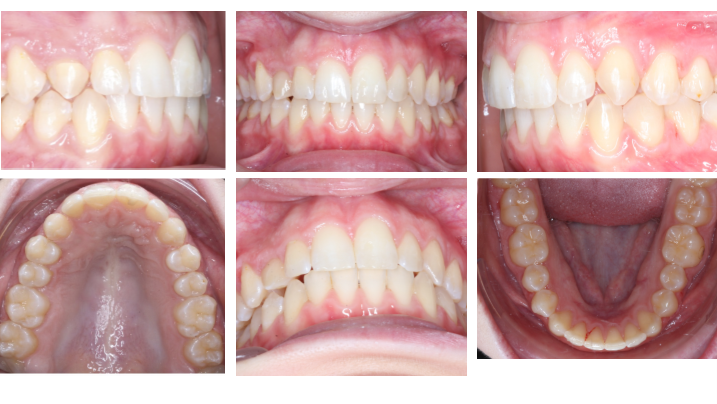 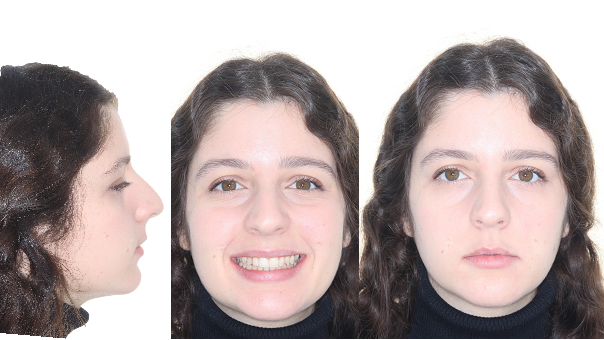 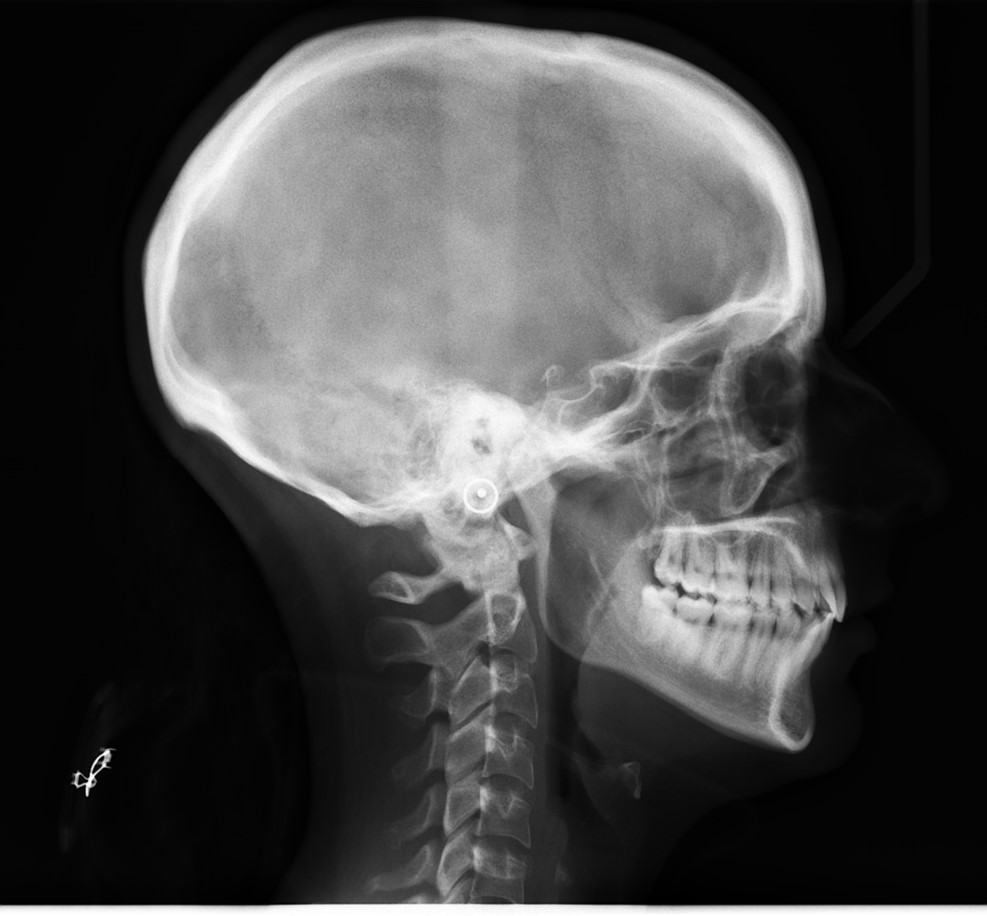 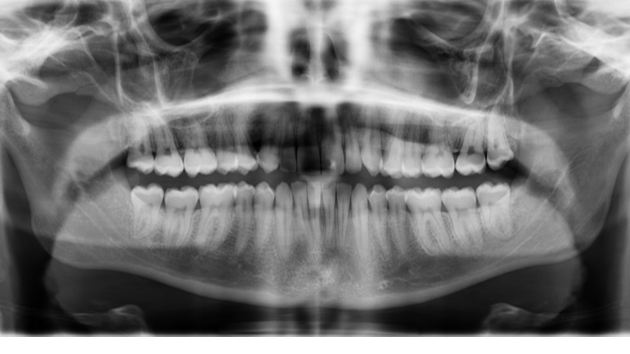 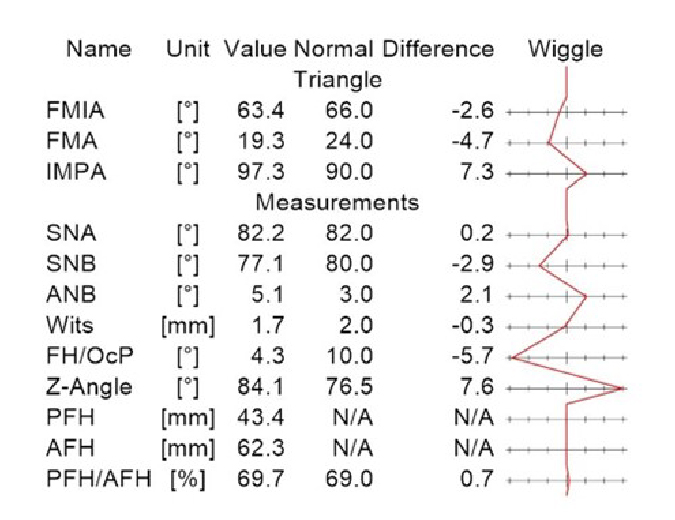 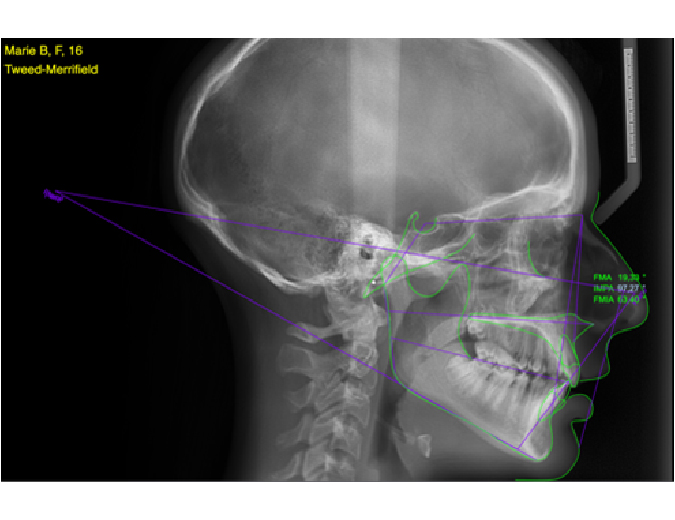 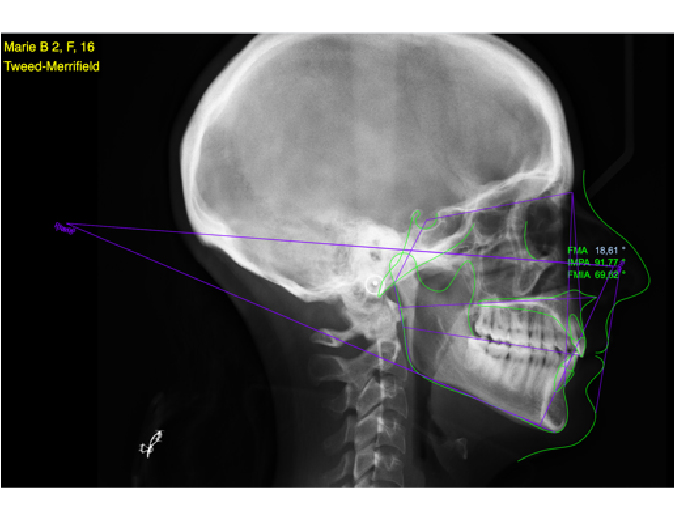 This case successfully illustrates how an impacted canine can be incorporated in the arch, by using clear aligner therapy effectively. Hybrid appliances even when employed were phased into an aligner overlay, making additional anchorage requirements redundant. Though this case report cannot be representative of all permutations of impacted cuspids that may present themselves, it does demonstrate an encouraging trend in contemporary protocols where forced eruption can be carried with an appliance system that –

Current orthodontics increasingly calls for patient centric therapeutics that incorporates quality of life during therapy as well. Mechanics have to be carefully crafted with efficacy and efficiency both being accounted for. Aligners are an esthetic and minimally invasive solution for most malocclusions, and current reports in scholarly literature do indicate promising trends.

Forced eruption of impacted teeth by means of dental extrusion can be a challenging movement to achieve using aligners alone. Inter disciplinary orthodontics with aligners warrants careful staging and phase-based planning as demonstrated. The combined use of buttons, lingual segmental appliances, labial sectional arches, elastics and aligners allows effective solutions that can be customized in a phase-based manner as demonstrated. 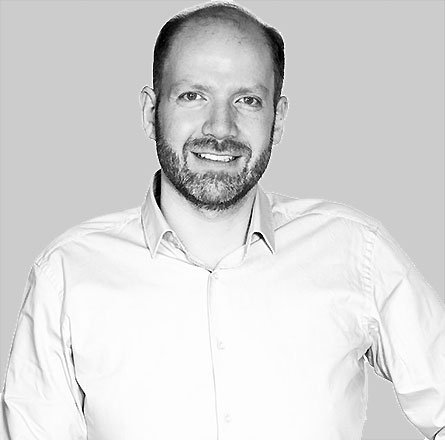 Dr Sabouni is a specialist orthodontist with 15 years of clinical experience and 10 years teaching experience.
His philosophy is to provide individualised aesthetic and functional treatment for my patients.
Dr Sabouni is a strong believer in 3D technology and artificial intelligence to improve orthodontics treatment.
He loves evidence-based orthodontics and I wrote several scientific papers in order to try to contribute to the knowledge about Aligner orthodontics.
Waddah SABOUNI qualified as a dentist in 2002 and as a specialist orthodontist in 2007 at the University of PARIS V, post graduate in lingual orthodontics and orthognathic surgery. Since then, he has been involved exclusively in orthodontic practices in south of France and in the UAE. Waddah has been using Invisalign since 2006 and has been awarded in 2015 for research project about orthognathic surgery and Aligner and has Diamond Apex Invisalign Provider status.
Waddah is a clinical speaker and member on the European Clinical Advisory Board for Align Technology.
He treated more than 5000 cases with Invisalign clear Aligner and he’s the first French provider since 2013
He is a member of the French General Dental Council; and is a Fellow of the AAO and the World Federation of Orthodontists and is a board member of the French Aligner society.
Waddah is the part time teacher of la reunion university and director of the European master of Aligner in France.

CASE PRESENTED WITH ACKNOWLEDGEMENT AND THANKS TO DR WADDAH SABOUNI
waddah.sabouni@gmail.com